I’ve been working on this project for some time now. This is my alarm clock running Linux.

These are the feature I wanted: 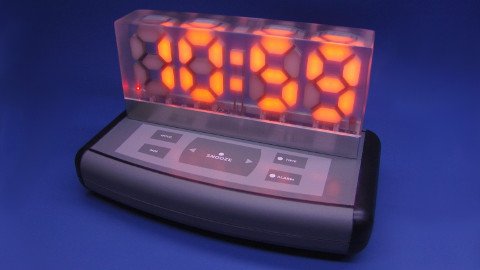 I have an old digital alarm clock which I had for almost 25 years. It does not have a battery to keep the time in case of a power failure so I plug it on the UPS near my computer. I noticed something weird, whenever the UPS in running on battery, the clock actually runs faster. It keeps it’s time synchronized to the frequency of the power line (60 Hz). I think that when my UPS is running on battery, the DC/AC inverter is producing a higher frequency and it screw up the clock time base.

Anyway, this clock is ready for retirement, it was time for a new one. So, why not build my own then?

I based my design on a processor capable of running Linux because it is more flexible and already offers reliable tools for many of the features I want and also the one I have not thought of yet. I realize that running Linux on a simple alarm clock is a bit overkill, I’m sure there is a way to do all that with a microcontroller, but I don’t have much experience in programming on MCU. Also, this project was an excuse to stick Linux into yet another device.

This is more than a clock, it’s a platform for experimenting. There are all sorts of interesting things you could do with it. For example, turn on the lights in the room when the alarm goes off by sending a command to an Insteon hub. I also added an external USB as well as an internal expansion headers for add-ons.

It is a four digits seven-segment display encapsulated in a clear casting epoxy block measuring 5” by 2 1/4” by 1”. Each digit is one inch wide by 1.5 inches high and has 0.3-inch wide segments. 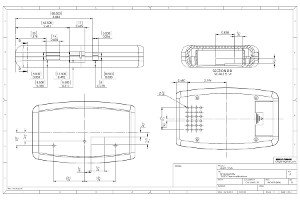 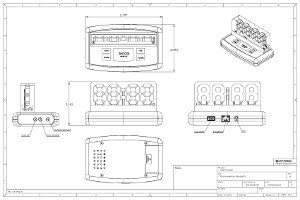 All mechanical drawings and schematics are available on Github

My design is based around the 1553DBKBAT plastic enclosure from Hammond Mfg but it required a few modifications. The opening on the top for the display connector, the holes for the volume control buttons on the end panel and the holes for the speaker on the bottom. For those cuts, I used the tried-and-true method which consists of printing a 1:1 template from the CAD software and gluing it onto the surface to drill or cut.

The sides of this enclosure are made from a softer plastic, almost like rubber. I was not too sure about cutting it myself, so I went to local shop (umake.ca) who laser cut it for me. I built a supporting jig so that the side to cut on the enclosure would face upward. A sent them a DXF file with the coordinates relative to a fixed reference point on the jig.

I designed the overlay graphics in Inkscape and printed it on Papilio waterproof inkjet vinyl paper (matte). Although, this paper is waterproof, I sprayed a thin layer of acrylic to seal it permanently. It is best to apply multiple thin coats while holding the can at 20cm from the surface. On the first attempt, I put too much at once and the colors washed off.

I made this part using the same epoxy mix I used for the segments diffuser for the display.

I was looking for something compact that could easily run Linux, so I opted for an Aria G25 SOM (System-On-Module). It is based on an ARM AT91SAM9G25 processor running at 400 MHz and have all the basic hardware (memory, ethernet PHY, power regulator) integrated. It is packaged in a 40mm by 40mm PCB (50mil pads pitch) that can be soldered directly to the motherboard.

For the keypad, I choose the AT42QT1085 QTouch sensor IC from Atmel. It provides eight capacitive sensing inputs and 16 general purpose I/O. I use three of the GPIO for LEDs under the snooze, time set, and alarm set buttons. Those LEDs are reverse mount SMT (OSRAM P47F). Since the LEDs are mounted inside the sensing electrode area, using a standard SMT led would split the electrode and remove more area thus, making the electrode less sensitive. I also added, as suggested in the datasheet, a 10nF bypass caps to the cathodes of each LEDs to prevent false detections or stuck keys when the LED is switched off (Hi-Z state).

This chip communicates with the host using the SPI protocol with a maximum clock frequency of 750kHz. To make it works in Linux was not so easy. I enabled hardware SPI support and SPIDEV in the kernel config. The first byte of a transaction was received correctly, but all subsequent bytes failed intermittently. This is because the QT1085 requires at least 100 microseconds between each byte. The actual delay, even when setting the speed at 500 kHz (which is the minimum), was not enough. To the best of my knowledge, there is no way to specify an additional delay between each byte.

I was able to bypass this problem by sending only one byte per IOCTL call and setting the cs_change option to 0. This cause the chip select line to remain active after each transaction. That way, the delay between the calls was more than enough.

The touch keypad PCB is held in place with strips of 3M 467MP adhesive film.

On the motherboard, there is an integrated USB sound card based on the PCM2704C codec IC and a TPA2005D1 amplifier to drive the tiny speaker in all its glorious, ground shaking 1.5 watts! I was not going for the best sound quality here, the speaker I choose is an AS04008CO-2-R which is 40mm long by 20mm wide and has a frequency response of 200 HZ to 20 kHz.

I was disappointed when I first tested it though. Outside the case, the sound was horrible but once it was installed inside the enclosure, it sounded much better. 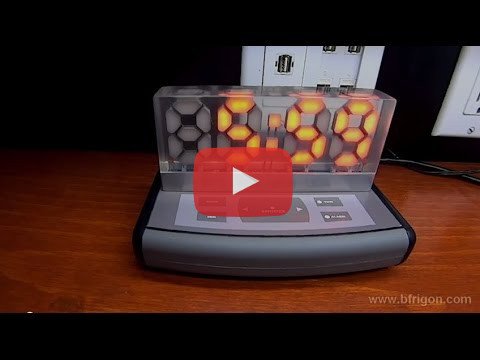 This part of the project is not completed yet. The circuit is going to be on a separate board which fits on the header near the ethernet connector. This header has 2 pins for voltage input, 2 pins for output, i2c bus and a pin for monitoring auxiliary voltage. For the moment, there are two jumpers that tie VIN and VOUT.

As of writing this article, the hardware portion of this project is almost done and I’m beginning to work on the software.

The clock is running the Linux kernel 3.18 and I used Buildroot to make my custom distribution.

For the bootloader, I used the AT91bootstrap from Sergio Tanzilli as a starting point and made my modifications. When the display is powered up, the digits are at full brightness. The bootloader sets the brightness to the default level and puts “- - : - -“ on the display while Linux is booting. Other devices are initialized later in the boot process or by the main application.

The clock application is written in Python. For now, it does not do much except showing time.

These are the repositories on Github for this project :